The Capitol Police "Guards" notched a gritty 14-6 victory on Wednesday over the "Mean Machine" in the Congressional Football Game for Charity at Watkins Recreation Center on Capitol Hill.

But members of Congress and their ex-NFL counterparts put up a competitive fight, led by quarterback Rep. Robert J. Dold, R-Ill., despite wet, windy and slippery conditions. 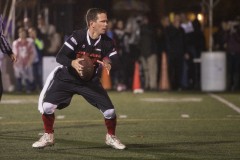 Just minutes after the 7:20 p.m. kickoff, "The Guards" intercepted a pass from Dold. Capitol Police drove the ball up the field and scored their first touchdown, to the delight of Chief Kim C. Dine, who joined the troops on the sidelines.

Playing defense near the end zone, Rep. Bill Huizenga, heard a "pop." The Michigan Republican hobbled to the medical tent, where medics bandaged his strained left calf. He later lamented the injury.

"There's going to be so many staff 'I-told-you-so's,'" Huizenga told HOH.

Congress lit up the scoreboard minutes later. Dold threw a touchdown pass to a member of Rep. Carlos Curbelo's staff, provoking cheers from the sparsely filled bleachers. They fell short on a two-point conversion and the 7-6 score lingered until the final minutes of the fourth quarter.

With the distraction of a rowdy GOP presidential debate , plus bad weather, turnout suffered. But supporters of co-captain Rep. Jeff Denham, R-Calif., including his French bulldog, Lily, brought plenty of enthusiasm.

Despite a "Mean Machine" march down the field, Dold's cannon could not yield a second touchdown. Even the man rumored to have the best hands on the team, Rep. Joseph P. Kennedy III, D-Mass., couldn't pull down the ball.

When Capitol Police slow-walked to the line of scrimmage after taking possession, the congressional sidelines got rowdy. There were boos, jeers and taunts.

"Scalise? Hey, we were fine until you got here," Rep. Rodney Davis, R-Ill., greeted House Majority Whip Steve Scalise, R-La., who had just arrived in his dress slacks.

The final upset for Congress came moments later. Capitol Police intercepted Dold's pass in the end zone, then ran it back up the field for 25 yards.

"The Guards" hoisted The Longest Yard trophy triumphantly at the end of the night. They named officer Reggie Tyson their MVP, while Dold got the congressional MVP nod.