The Cleveland-area congressman who was chairman of the House select committee that investigated the assassinations of President John F. Kennedy and civil rights leader Martin Luther King Jr., passed away late Tuesday at the age of 90.

Rep. Louis Stokes, D-Ohio, served in the House for three full decades, retiring in 1999. He was notable on Capitol Hill for serving as chairman of the Ethics Committee, as well as chairman and ranking Democrat on the old Veterans' Affairs-Housing and Urban Development appropriations subcommittee, which drafted one of the two largest domestic discretionary spending bills.

"Our family is mourning the loss of our husband, father, grandfather and close confidant. He died peacefully with Jay, his wife of 55 years, at his side. During his illness, he confronted it as he did life — with bravery and strength. He was always guided by faith, while embracing the prayers and well wishes of family, friends and constituents," the family said in a statement.

Stokes, seen here as chairman of the Select Committee on Assassinations, in 1978. (Courtesy Office of the House Historian)

He a founding member of the Congressional Black Caucus, and the first black member to sit on the powerful Appropriations Committee, according to CBC Chairman G.K. Butterfield, D-N.C.

"Members of the Congressional Black Caucus are deeply saddened by the passing of one of our founding members Louis B. Stokes," Butterfield said in a statement. "As the first African American to represent Ohio, Mr. Stokes was a pioneer in public service, breaking numerous barriers for African Americans and for all people of color during his extraordinary career as an elected official on the local, state and federal levels."

"Lou Stokes always did the right thing and spent his life fighting for Ohioans. I've been proud to call him a friend and a mentor, whose counsel I relied on for 30 years. Lou Stokes continued to stand up for northeast Ohioans long after he left Congress," Brown said. "He'll be remembered in the communities he strengthened, the veterans he served, and the many lives he touched. Connie and I send our thoughts and prayers to his family."

The 1998 edition of Politics in America noted that Stokes was among the senior appropriators who declined to applaud President Bill Clinton's effort to get line-item veto authority, something that undercut the power of the Appropriations cardinals.

The biography also noted that Stokes' tours as chairman of the Ethics Committee were not without controversy. Stokes was appointed Ethics chairman to oversee the Abscam-related inquiry into the dealings of fellow appropriator Rep. John P. Murtha, D-Pa. When the committee declined to propose taking action against Murtha, the panel's counsel resigned.

After a break from wielding the Ethics gavel, Stokes returned briefly in 1991, until the House bank scandal began to unfold. Stokes stepped aside in a letter to Speaker Thomas S. Foley, telling the Washington Democrat, "I have admitted that on occasions ... my account was overdrawn."

Ultimately, it was reported that Stokes had 551 overdrafts. 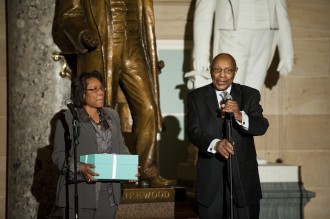 But Stokes was by no means the only member to get ensnared in that situation, and it did not seriously put his seat at risk. When the district lines were redrawn following the 1990 census, his territory expanded beyond his largely black district into more white working-class suburbs of Cleveland, but even with the ethics issues swirling, he won 69 percent of the vote in a four person race.

"His work affected thousands. When he spoke, people listened. Congressman Stokes exuded leadership, vision and purpose. He was an example for us all. It was a privilege to work with him and walk in his Congressional footsteps," said Democratic Rep. Marcia Fudge, who now represents Cleveland. "My thoughts and prayers are with his wife Jay, children, Shelley, Angela, Louis, and Lori, and his entire family during this difficult time. As the Book of Matthew says, 'Well done, good and faithful servant. Well done.'"