If the two major parties nominate controversial candidates, there looks to be room for a candidate in the middle like Bloomberg. (Alain Jocard/AFP/Getty Images File Photo)

You are the eighth-richest person in America with a net worth of more than $38 billion, according to Forbes magazine. You served three terms as mayor of New York. You’ve been a Democrat, a Republican and an independent. And you believe that the country has suffered from political polarization and needs a strong president who can get things done and bring the country together.

You are Michael Bloomberg, and you want to be president. Can you make it happen, even assuming the “best case” scenario of Democrats nominating Vermont Sen. Bernard Sanders and the GOP picking either Donald Trump or Texas Sen. Ted Cruz?

A quick check of the national political environment is encouraging. One-third of voters self-identify as independents , and Congress’ job approval sits in the low double digits. Voters are unhappy with the status quo and the two parties’ political establishments.

And with the two major parties nominating controversial candidates – that’s the scenario I’m starting with – there looks to be room for a candidate in the middle.

But presidential elections are won and lost in the Electoral College, so the best way to evaluate Bloomberg’s chances is to examine his potential path to victory. The first step is to list the states that Bloomberg almost certainly could not carry.

Running as a moderate (or centrist, if you prefer), Bloomberg would have little or no chance of carrying the most ideological states and the most partisan ones. Not surprisingly, the two groups overlap, according to a recent Gallup analysis of state partisanship and ideology . 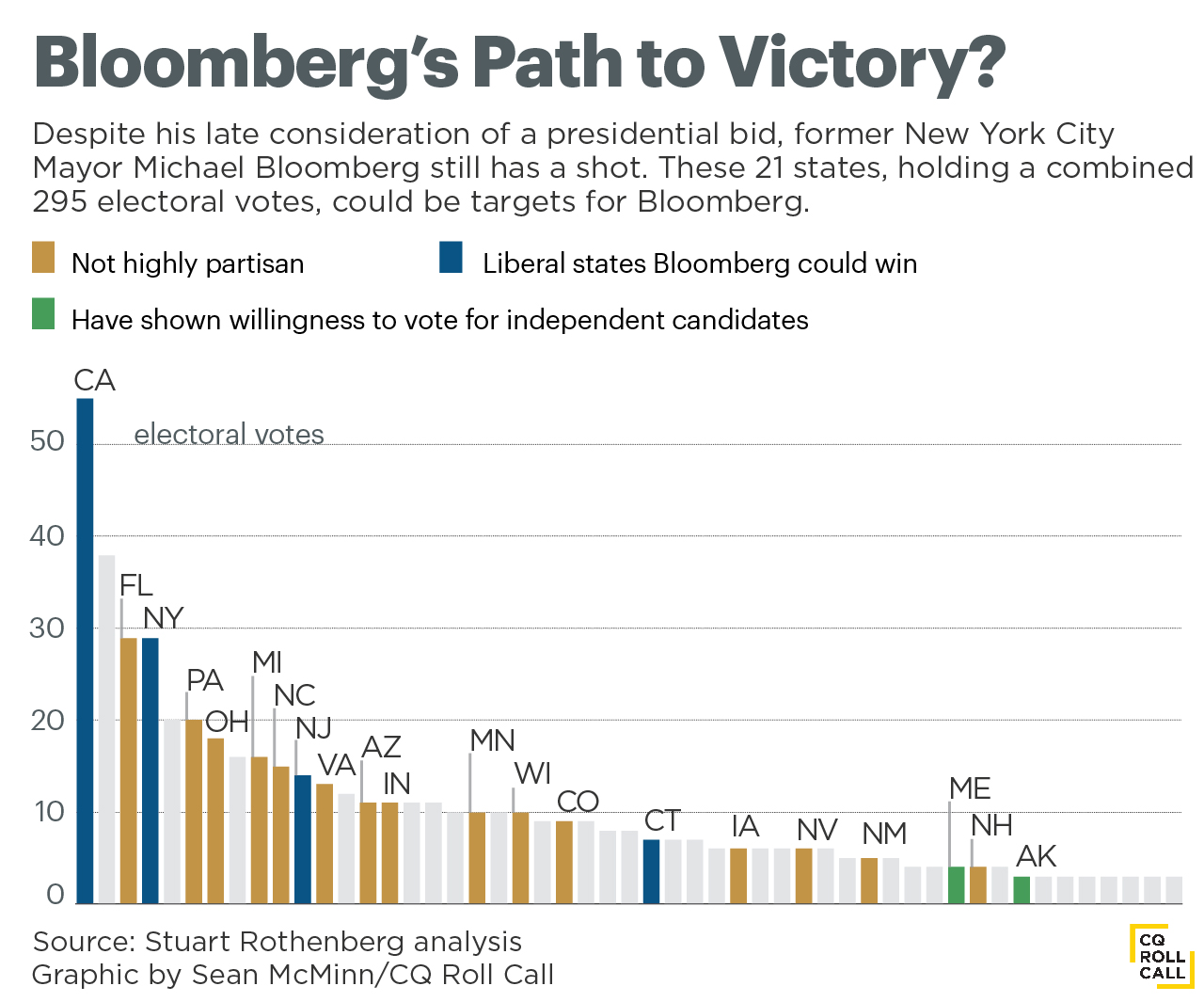 Gallup found Mississippi, Alabama, Louisiana, Utah, Arkansas, Tennessee, Montana, Idaho, Oklahoma and South Carolina are the nation’s most conservative states. Bloomberg could not carry any of them.

To those, I would add Gallup’s most reliably Republican presidential states that are not already on the most conservative list: Wyoming, South Dakota, Kansas, North Dakota, Nebraska, Kentucky, West Virginia, Missouri, Texas and Georgia.

Voters in those 20 states, with 166 electoral votes, would be very likely to support a conservative and/or a Republican, not an elitist Manhattan billionaire independent who occupies the left on guns, the size of soft drinks and other issues.

Bloomberg would also have trouble carrying the most liberal and Democratic states in the country, since they are most likely to respond favorably to a progressive nominated by the Democratic Party.

Gallup’s list of most liberal states includes Massachusetts, Vermont, Hawaii, Oregon, Washington and Maryland. Add to them states that are among the most reliably Democratic – Rhode Island, Delaware, Illinois, New Mexico, Michigan and the District of Columbia – and you have 12 states with 151 electoral votes.

Four other states that make Gallup’s most liberal and most Democratic lists would have to be targeted by Bloomberg and might give him an unusually long look.

New York, Connecticut and New Jersey might be uniquely receptive to a Bloomberg candidacy, and California, which ranks seventh as both the most liberal and the most Democratic state in the nation, according to Gallup, might find his message appealing. More importantly, if Bloomberg were to have any chance of winning 270 electoral votes, he would need to carry the Golden State and the other three Northeast states.

Using the Gallup categories as a guide, I count 29 states (plus D.C.) with 243 electoral votes as starting out of Bloomberg's reach. That leaves 21 states, with 295 electoral votes, as potentially winnable (assuming that Bloomberg makes it on all state ballots).

Those states would be “winnable,” at least in theory, because either they are less partisan and less ideological and therefore might find a moderate independent appealing, have shown an unusual willingness to support independent candidates (Maine and Alaska, but also Connecticut), or might be places where Bloomberg would have unique appeal.

Bloomberg would need to win 270 of the available 295 electoral votes, a virtual impossibility considering that some states would be particularly difficult for him in a three-way race – e.g., Alaska, Pennsylvania, New Mexico, North Carolina and Ohio.

Part of Bloomberg’s problem is that his appeal is not equal to disenchanted members of each party. His progressive positioning on cultural matters and New York City's reputation represent a far greater impediment to him winning Republican voters than is his pragmatism on economic issues to attracting Democrats.

Bloomberg oozes Manhattan (where I was born and raised) and everything that implies, and he would sell in more upscale, pragmatically liberal areas like southeastern Pennsylvania but not in conservative and populist areas, such as western and central Pennsylvania.

If Bloomberg can’t win 270 electoral votes, he can’t win the presidency. The House of Representatives would pick the next president if no candidate gets a majority in the Electoral College, and it is impossible to imagine partisan officeholders selecting an independent.

Of course, even if Bloomberg could not win the White House, he could impact the election’s outcome.

In theory, a Bloomberg candidacy could put some GOP states at risk by siphoning off pragmatic, more moderate Republican voters in normally Republican states, allowing Sanders to win states with only a plurality. Or, conversely, he could attract enough pragmatic Democrats to allow Trump or Cruz to win swing Democratic states like Pennsylvania and Colorado.

Yes, he could have an impact on the electoral map. But if he does, he would likely draw many more Democratic voters than Republicans, helping the Republican nominee win swing states or throwing the election to the House, where the GOP is likely to control more state delegations.

Indeed, a February 2-4 Quinnipiac University survey showed Sanders running well ahead of both Trump and Cruz in a head-to-head ballot test but running even against both men in a three-way test including Bloomberg.

Independent candidates almost always fade as November approaches. There are plenty of examples in state contests, but Ross Perot is the most obvious presidential example.

But the national map and voters’ strong partisan attachments – in spite of the public’s grumbling about partisanship – make it tantamount to impossible for Michael Bloomberg to win the White House. The electoral votes simply are not there. And if he were to run, he almost certainly would increase the GOP nominee’s chances of becoming the next president.

At the end of the day, Bloomberg’s path to the presidency in 2016 looks remarkably like a dead end.

Related:
Trying to Make Sense of the Post-New Hampshire Republican Race Can Rubio Follow Romney’s Path to the Nomination? What the Hell Happened to Jeb Bush?

Save for later
Topics: stuart-rothenberg-columns-archive presidential