In New Hampshire, Frank Guinta Soldiers On Amid Controversy

PORTSMOUTH, N.H. — Embattled GOP Rep. Frank C. Guinta may be one of the most vulnerable congressional incumbents in the country, but you wouldn’t know it if you spent time with the Republican congressman in his district.

Instead of hiding out, Guinta's had an active August recess, hosting town halls and visiting businesses in his southeastern New Hampshire-based 1st District as if the controversy swirling around him over campaign violations did not exist.

On this misty Tuesday afternoon in Portsmouth, a popular tourist destination on the Granite State's stretch of Atlantic coastline, Guinta met with about a dozen constituents at an IT security company for a roundtable on cybersecurity issues. It was the third stop Guinta made that day, and not the last one on his schedule.

Guinta listened to concerns from the crowd of business owners, who were worried that regulations designed to help protect customers' personal financial and medical information online were too complicated to comply with, and opened small-business owners up to costly litigation.

He told stories of his own woes in protecting his own personal data, including saying his information was in the massive Office of Personnel Management hack earlier this year.

Guinta told CQ Roll Call he tried to do "about five events a day," during the recess. "Today we’ll hit five or six."

While Guinta was at ease discussing policy with constituents, the two-term Republican was always going to have one of the one of the toughest re-election battles in the country — even before news broke in May that Guinta had violated Federal Election Commission rules in his first congressional bid in 2010 for accepting an illegal $350,000 loan from his parents. The FEC fined him  $15,000 and ordered the money be returned, though Guinta maintains he did nothing wrong.

Guinta's 1st District seat is one of the few remaining swing seats in the country, having changed hands three times in four election cycles. President Barack Obama carried the district twice, each time by single-digit margins. 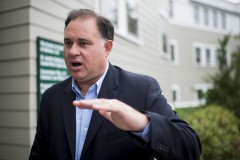 But since the May scandal broke, a number of members of his own party, including GOP Sen. Kelly Ayotte, called for Guinta's resignation, likely hoping a less controversial candidate would emerge. The Union Leader, a conservative newspaper in the state, published a six-word editorial following the scandal that merely said, "Frank Guinta is a damned liar."

In an interview with CQ Roll Call after the event, Guinta said he plans to run for re-election in 2016.

He added that months after the news of the violation came to light, constituents don't bring the FEC issue up, and he's not worried it will hurt his chances next fall.

"What I focus on is what I control, which is how I represent the people," Guinta told CQ Roll Call after the roundtable. "I don’t deal with the political side. I just let the political side take care of itself and I think that’s the best way to serve."

Outside the technology company, Guinta ran into a Sharon Lovejoy, a constituent who was excited to see him. The two posed for a photo before Guinta hopped in a car to head to another event.

Lovejoy, a Realtor who was married to the late state Sen. George Lovejoy , said she supports Guinta for re-election.

But operatives on both sides of the aisle say the FEC troubles exacerbate Guinta's vulnerabilities.

Many say his fundraising is likely to dry up, making it challenging to communicate with voters.

And the FEC troubles are ready-made for attack ads questioning his ethics that his opponents could blast on the airwaves.

"He’s very much into, 'It’s in the past; it’s over,' and it’s odd," Kathy Sullivan, a former chair of the New Hampshire Democratic Party, told CQ Roll Call in a phone interview. "Many of the Republicans have said he should resign. Newspapers unanimously have said he should resign, and it’s obviously a story that won’t go away. I would anticipate that in a primary it's going to be an issue. And, if for some reason he passes a primary, it’ll obviously be an issue in the general."

At the moment, Guinta faces a primary from former University of New Hampshire Business School Dean Dan Innis. Innis ran against Guinta in a primary in 2014 and came up eight points short — a small margin given Innis had never run for office before.

But others are considering entering the primary, too, including state Rep. Pam Tucker, a tea party-aligned state legislator who flirted with a congressional bid for this district last cycle. A crowded primary could aid Guinta's chances, creating a possibility that the anti-Guinta vote would get splintered by a large field.

"I wouldn’t be surprised if more people get in that race," one New Hampshire GOP operative said. "It'll be like an open seat."

If Guinta survives the primary, he'll be a top Democratic target and would likely face the Democrat he's traded this seat with every cycle since 2010: former Democratic Rep. Carol Shea-Porter.

Shea-Porter filed the paperwork for a comeback bid earlier this month. And she'd almost certainly use the argument that Guinta unfairly maligned her in their 2014 race, when he called her a liar in a campaign ad for suggesting the FEC was still investigating Guinta's campaign finances.

Shea-Porter's campaign did not return multiple requests to meet with CQ Roll Call during a four-day trip in New Hampshire.

And Guinta said he'd look forward to a race against the foe he's faced three times before.

"It wouldn’t be a race without me and Carol in it," Guinta joked.