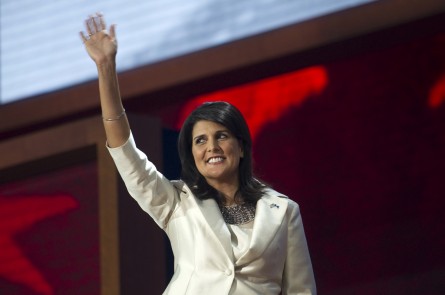 On the eve of her state's GOP presidential primary, South Carolina Gov. Nikki Haley threw her support behind Marco Rubio.

Haley plans to make her endorsement public at an event in Chapin on Wednesday evening and spend the days before the Saturday primary stumping with the Florida senator in the Palmetto State, The State reported . South Carolina Sen. Tim Scott and Rep. Trey Gowdy have also endorsed Rubio, and together cut a radio ad for him on Wednesday.

Haley, who's often mentioned as a possible vice presidential candidate, delivered the GOP response to President Barack Obama's State of the Union address last month. She used the platform to deliver a sharp rebuke of Donald Trump and some of his more extreme rhetoric about immigrants.

In 2012, Haley endorsed former Massachusetts Gov. Mitt Romney, who went on to lose the state's nominating contest to former Speaker of the House Newt Gingrich.