"I was dressed and ready to go two hours ago," he said, explaining that he was late because first, his plane couldn't take off and then, it couldn't land. The crowd, who'd queued up hours earlier in a persistent drizzle, didn't care. They wiped their brows and settled in to hear Clinton improvise one of his characteristically engaging, and sometimes rambling, stump speeches about what his wife would do if president.

The most sought-after Democratic surrogate came to this swing state Wednesday — first for an event in northern Virginia and later for a rally in Richmond — days before its March 1 presidential primary. Clinton is favored to win the state, but Vermont Sen. Bernard Sanders has been narrowing the gap and was rallying supporters in Norfolk Tuesday.

Beyond next Tuesday, Virginia is a crucial battleground state for Democrats in the general election, but not just at the presidential level. In a purple state, Democrats are hoping that having Clinton at the top of the ticket will help them pick up seats in the House.

As Bill Clinton reminded the crowd, President Barack Obama twice carried the state. "Thank you, northern Virginia, you did it," he said. Gov. Terry McAuliffe, a close friend of the Clintons, is a Democrat, and there have been times across the state, Clinton said, when Democratic down-ballot candidates have received more aggregate votes than down-ballot Republicans. 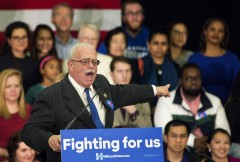 And yet, Republicans control the General Assembly, and the party has an eight-to-three advantage in the current congressional delegation — a result, Clinton said, of racial gerrymandering.

The partisan split in Virginia's congressional delegation isn't lost on voters. Volunteers for 8th District Rep. Don Beyer, who introduced Clinton Wednesday, worked the line outside the Alexandria event to collect signatures for Beyer to qualify for the ballot. Beyer is in a safe Democratic seat, which means his re-election isn't in doubt. Only two of Virginia's congressional districts — the 10th and the 2nd — aren't safe seats for one of the two parties, according to the Rothenberg & Gonzales Political Report /Roll Call.

"That's a travesty — the fact that there's so few competitive races," said Fairfax resident Peter Michelman, who was standing in the rain with his wife waiting to enter the Clinton rally.

A court-mandated redraw of the state's congressional districts has left Democrats optimistic they can pick up at least one additional seat this fall in the 4th District, which is much more Democratic under the new map . Current Rep. J. Randy Forbes has decided to run for the neighboring 2nd District after Rep. Scott Rigell decided to retire at the end of this Congress. Democratic state Sen. Donald McEachin, a widely respected black legislator, is expected to get in the 4th district race , a Democratic operative in the state said Wednesday.

The 2nd District became slightly more Republican under the state's new map, but Democrats don't plan to write it off — especially if Donald Trump is the GOP presidential nominee.

Democrats' top target in the state is GOP Rep. Barbara Comstock, who won the 10th District by 16 points in 2014. At the presidential level, though, Comstock's seat has been a swing district, and because of that, Comstock is on the National Republican Congressional Committee's Patriot Program for vulnerable members. The Rothenberg & Gonzales Political Report/Roll Call rates the race Leans Republican , but Democrats are betting on presidential-year turnout making a difference for Comstock's challenger.

And that's where the state's March 1 presidential primary comes in to play. For congressional campaigns, primary day is a golden opportunity to engage with voters ahead of their own June 14 primary and the general election in November.

Businesswoman LuAnn Bennett , the ex-wife of former Virginia congressman James P. Moran, is challenging Comstock, and her campaign said it intends to have a robust presence at the polls on Tuesday, with volunteers talking to voters about Bennett in the 10th District.

At Bill Clinton's Wednesday event, held in the neighboring 8th District, a few Democrats from the area said that even though Comstock isn't their representative, they had heard of the challenge against her.

Even Washington, D.C., resident Michael Ramirez said he's ready to help out where he's needed, having previously volunteered for Beyer and state-level elected officials across the Potomac River. "I always lend my services to northern Virginia; it's such a purple state," he said.

Comstock has backed Florida Sen. Marco Rubio in the GOP presidential primary, but in the wake of his second-place showings in South Carolina and Nevada, Democrats are hoping they'll have the opportunity to tie Comstock to Trump instead, while using Hillary Clinton to help boost turnout for Bennett.

"There's no question Hillary Clinton is the strongest candidate to help win seats across the country," said 8th District Democrat Paul Friedman, as he waited for Bill Clinton to arrive.

Contact Pathé at  simonepathe@rollcall.com  and follow her on Twitter at  @sfpathe . Related: Randy Forbes Switches Districts for 2016 Race Judges Select New Virginia Map Roll Call Race Ratings Map: Ratings for Every House and Senate Race in 2016 Get breaking news alerts and more from Roll Call in your inbox or on your iPhone.