Voters, Tigers and Beers — Oh My!

Landrieu poses for a selfie with LSU football fans as she campaigns at tailgate parties on campus. (Bill Clark/CQ Roll Call)

BATON ROUGE, La. — Six weeks from Election Day, Sen. Mary L. Landrieu gathered the troops on the Louisiana State University campus, where tens of thousands of football fans and prospective voters congregated for hours ahead of the Saturday night game.

The three-term Democrat faces arguably her most challenging race yet against, among others, Republican Rep. Bill Cassidy, who worked the Tigers fans for votes a couple hours later. Landrieu's best shot may be to break 50 percent in the November jungle primary, but that avenue to victory has shrunk since her last race in a state increasingly difficult for any Democrat to win.

For that reason, Landrieu attempted to reach every voter she could among the boisterous and boozy crowd before kickoff.

Nearly two dozen volunteers and staff formed a circle around Landrieu at a tailgate in the heart of campus, where her younger brother Martin offered food, water and beer to the campaigners — who all had been trying to keep up with the hyper-speed pace of the senator for more than a half hour already. Landrieu ordered the group to split in two, to remind voters about the Nov. 4 jungle primary, early voting dates and to hand out stickers.

“Not everybody is going to be a supporter,” Landrieu told them, “but just be nice, friendly. You’re very visible.”

Not long after, Landrieu went to new lengths for a vote. Egged on to perform a keg stand, she instead held the spigot for a 20-something supporter — one of many methods the LSU faithful would use to imbibe that Saturday afternoon.

Beer pong, Jell-O shots and cocktails cooked up at full bars — it was all part of the college football, pre-game culture that consumed this entire campus and served as the backdrop for a critical day of campaigning for both candidates.

At times, Landrieu was told to “keep walking” and was even booed once. But for the most part, the senator received smiles, hand shakes and photo requests.

“I really enjoy campaigning. You have to, to do this,” Landrieu told CQ Roll Call as she power-walked toward Memorial Tower. “People are really polite. It’s good to be visible and people to see you out working.”

Fred Landry, a Democrat from Thibodaux in his late fifties, was hanging out at the joint tailgate party he's hosted with Lou Diaz at every home game since 2003. Diaz stirred up a concoction he calls the LSU Lou Snowball — which is mostly four equal parts of varied flavored rum from the Virgin Islands — as Landry chatted.

“It’s time for a change,” Landry said. “I’m a registered Democrat, but I don’t vote by party. I vote by the person. That’s how a lot of the people are down here.”

In a state trending Republican, it’s vital for Landrieu to remind voters why they supported her in the past and explain how it would be disadvantageous not to do so now. Her message is based largely on three points: her clout as chairwoman of the Senate Energy and Natural Resources Committee, her work to help the coast recover from destructive storms and her ability to deliver federal funds for the state's various needs.

Before traveling to LSU on Sept. 20, Landrieu attended a volunteer event in Lake Charles, in the Southwestern corner of the state, to mark the nine-year anniversary of Hurricane Rita. It served as another opportunity for Landrieu to highlight her work to secure coastal restoration funding and revenue sharing after both Rita and Hurricane Katrina. 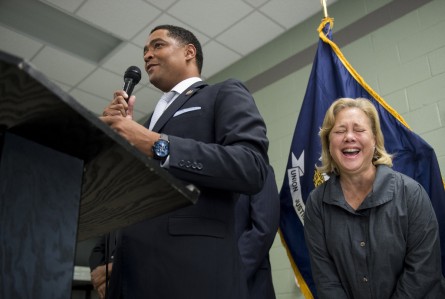 While Democrats still hold a 19-point voter-registration edge, the party no longer makes up a majority of the electorate as it did in 2008 — and much of that loss in voters came among whites. Landrieu, who was able to win a third of the white vote in 2008, won 52 percent of the vote that year, running ahead of President Barack Obama by 13 points.

In an effort to motivate her Democratic base, of which blacks now make up a majority, the senator appeared Monday alongside 2nd District Democratic Rep. Cedric L. Richmond and locally-elected Democrats in both New Orleans and Baton Rouge — where a sizable portion of the state's black Democrats reside. Blacks made up 29 percent of the statewide vote in 2008 — Obama's first presidential election — and voted 96 percent for Landrieu.

How does she replicate that?

“People are going to vote because they understand the issues at stake,” Richmond told CQ Roll Call after an event with African-American seniors at a community center in the Pontchartrain Park neighborhood of New Orleans. “We’re going to do everything we can to get them out. I don’t think I have a tough race, but I’m going to make sure we knock doors and talk to people, because getting Mary re-elected is big for a state like Louisiana.”

The broader question hanging over the race is whether Landrieu can break 50 percent again in a multi-candidate primary field, which includes tea-party-backed Republican Rob Maness.

She has added motivation to close the race in the first round: Winning in a runoff could be especially difficult this year should Republicans emerge from Election Day on the verge of winning back the Senate. The GOP can do that by netting six seats, and Landrieu's is among the most endangered.

She has won tough races before, but the senator now faces a well-funded opponent and is running in the second midterm of an unpopular Democratic president and in a national environment favorable to the GOP.

In interviews with voters at LSU, it’s clear Landrieu might not have the support of every registered Democrat, but she hasn’t lost all her Republican backers either.

“I’m not necessarily voting the party line,” said Johnny Norwood, 35, of New Orleans, who said he is a registered Republican. “Cassidy is a little extreme from what I can tell. I like the fact that [Landrieu's] been there awhile and is head of Energy. That’s important around here.”

Cassidy landed on the campus of his alma mater with his wife, 13-year-old daughter and a half-dozen volunteers about 90 minutes before game time. He was dressed for a hike, appropriately, and wasted no time moving from the law school to the stadium, telling a CQ Roll Call reporter he was mostly skipping students to talk with older, higher-propensity voters.

The three-term congressman, whose district includes LSU, found plenty of positive reinforcement and ran into numerous people he knew. One supporter told Cassidy not to waste a flier on him, since the congressman already had his vote. Others kept him chatting before he’d politely ask they get him more votes and then move on to the next crowd. 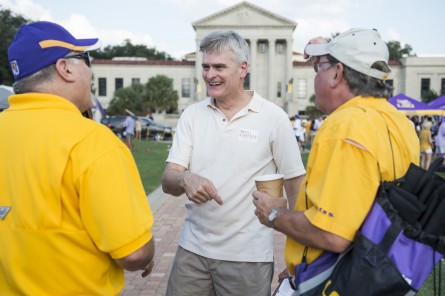 Another backer, Thelma Lennard of Shreveport, wondered why Cassidy had only agreed to two of five proposed debates — something Landrieu has been hitting him on and Lennard's local news had been covering. The congressman explained he prefers interacting with voters to spending a week preparing for a debate.

“I think he is better not only for Louisiana, but for the United States,” said Jim Willis of Covington. Asked if his support for Cassidy had anything to do with Landrieu’s ties to the president, Willis said: “It probably does to some extent. But even if Obama wasn’t in office, he just fits our values more.”

As kickoff was minutes away, Cassidy finally slowed down enough to take reporter questions, though he was soon back to greeting fans lined up to enter the stadium.

“Really, the real question is how can she win,” Cassidy said when asked how a Republican would finally defeat Landrieu. “Look at the reception we got. People in this state want change. They want someone who represents their values rather than Barack Obama’s values.”

Roll Call Election Map: Race Ratings for Every Seat Get breaking news alerts and more from Roll Call in your inbox or on your iPhone.