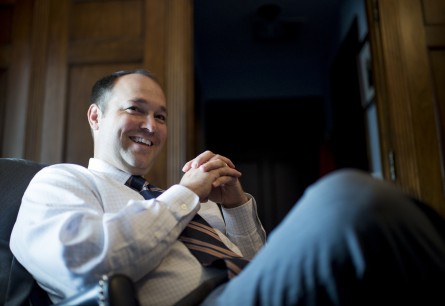 Stutzman is vacating his seat to run for the Senate. (Bill Clark/CQ Roll Call File Photo)

Tom had been openly considering jumping in the race , posting a letter to that effect on his farm's website this spring. In a subsequent letter sent to friends and supporters Tuesday, Tom said he stepped down from running his family's business, Tom Farms LLC, one of the largest suppliers to Monsanto.

"Together, we have grown Tom Farms into an industry leader. Now I want to direct my energy into helping our nation grow again," he wrote.

A GOP operative with knowledge of Indiana politics expects Tom to make a formal announcement in October.

Tom was appointed to the Indiana Economic Development Corporation Board of Directors by former Gov. Mitch Daniels, and given that background, economic issues are likely to be central to his campaign.

"My top priority will always be making sure that the families who call the 3rd District home will have the kind of economic opportunity that is the foundation of a strong America," Tom wrote in Tuesday's letter.

In an already crowded primary, Tom will likely use his business experience to bolster his conservative credentials.

"I believe Congress needs a lot more conservative citizen leaders who have created jobs, met a payroll, and helped improve their communities," he told his supporters.

Besides his background, Tom's potential to self-fund a campaign could give him an advantage over the other Republicans in the race, which include two state senators and one former state legislator from Wisconsin.

Pam Galloway, a retired physician who moved to Indiana in 2012, was the first to announce her candidacy in May. As a former state legislator in the Badger State, she has political experience, but her name is still relatively new to Hoosiers.

Galloway had raised less than $1,500 by the end of June, which she supplemented with a $50,000 loan to her campaign. She ended the period with $26,000 in the bank and is likely gearing up to spend more of her own money on the race.

State Sen. Jim Banks, a Naval Reserve officer first elected to the state Senate in 2010, also got in the race in May . Banks returned in April from an eight-month deployment in Afghanistan, during which time his wife, Amanda Banks, held the seat. Banks had raised $140,000 by the end of the 2nd quarter and had $135,000 in cash on hand.

State Sen. Liz Brown, a former Fort Wayne City Council member, also jumped in in May . A lawyer, she owns her own mediation business. Brown had raised $124,000 by the end of the 2nd quarter, but she gave $76,000 of that to her own campaign. She had spent little as of June 30.

In addition, Scott Wise, who ran as a Libertarian in 2014, is trying his luck as a Republican this time, but hasn't filed with the FEC.

In this conservative district, the winner of the May 3 primary will likely win the seat. Mitt Romney carried the district by double digits in 2012, and the Rothenberg & Gonzales Political Report /Roll Call rates the race Safe Republican .