Bush, above, and Rubio's presidential bids in Florida are casting a shadow over the fundraising race in the state's Senate primary. (Al Drago/CQ Roll Call)

Two favorite sons of Florida running for president in the crowded GOP primary field are stunting fundraising for the 2016 Senate race in the Sunshine State, sucking up the time and attention span of Florida's top donors, according to multiple Florida Republican operatives.

The presidential campaigns of former Florida Gov. Jeb Bush and outgoing Florida Sen. Marco Rubio have siphoned off the time and money from top donors that could be going to Republican Senate candidates. The cash squeeze has been so bad that the leading Democrat in the race raised nearly as much in the third quarter as the three top Republican candidates combined.

"You have two native sons who are leading contenders for the nomination from Florida, and then you have, some people forget, [Donald] Trump, [Ben] Carson and [Mike] Huckabee also have homes in Florida," said Nick Hansen, a Florida Republican consultant who works for GOP Rep. David Jolly's Florida Senate campaign. Jolly is one of three top Republicans running for the Senate seat, open this cycle because of Rubio's presidential bid.

"Obviously in a presidential race, even when you don’t have the native sons like we do with Governor Bush and Senator Rubio, it’s a state people come to fundraise in, and we have a huge Republican field, so you have a couple of forces at play," Hansen added.

Among the GOP Senate primary field, Rep. Ron DeSantis led the pack, bringing in $754,000 from July 1 through Sept. 30, according to a filing with the Federal Election Commission. He was followed by Lt. Gov. Carlos Lopez-Cantera, who raised $462,000 in the third quarter, while Jolly brought up the rear with just $378,000. 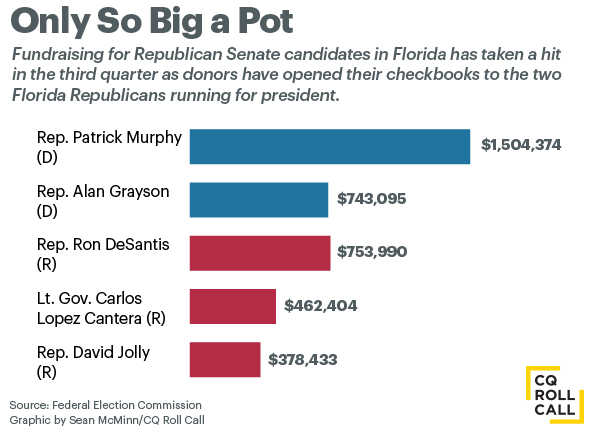 Both Lopez-Cantera and Jolly's hauls would be strong for House candidates. But they are dangerously low numbers for an ultra-competitive statewide Senate race — one of just three Senate contests currently rated a Tossup by the Rothenberg & Gonzales Political Report/Roll Call.

"I will say in Florida, you have Jeb and Marco here, and they are definitely getting up all the donors," said Ryan Wiggins, a Florida Republican strategist working for Lopez-Cantera's campaign. "But I think we are very proud of the numbers we were able to pull in, are happy with the progress and we feel good."

Also affecting fundraising is Florida Chief Financial Officer Jeff Atwater, a Tallahassee Republican popular among the Florida GOP political class. Atwater initially passed on a bid soon after Rubio's presidential announcement, but he's once again mulling a run. And GOP operatives say his looming presence over the race is also leaving donors waiting on the sidelines.

Whatever the reason behind the stunted fundraising, Democratic Rep. Patrick Murphy brought in twice as much as DeSantis last quarter.

Murphy, a top Democratic recruit and prolific fundraiser, brought in $1.5 million last quarter. The haul brought Murphy's war chest to just less than $3.5 million, more than any of the candidates in the race. All three GOP candidates have $3.5 million in cash on hand, combined, with DeSantis leading the GOP pack, with $2.4 million in the bank. (This was Jolly and Lopez Cantera's first quarter in the race.) Rep. Alan Grayson, who is also running in the Democratic primary, raised $743,000 in the third quarter, but had just $250,000 in the bank. Grayson, however, is one of the wealthiest members of Congress, giving him the ability to self-fund a bid if need be.

Raising money in Florida is essential, as campaigns play out mostly on the television airwaves. That's thanks to the state's sheer size — both in geography and population — that makes television advertising the best way to reach the widest swath of voters.

Republicans, however, say they are unconcerned about the disparity — for now.

They say once the state's presidential primary passes in March, donors will become more focused on the state's Senate contest — expected to prove crucial to which party controls the chamber. After that, donors will still have months to fill the coffers of the GOP Senate candidate of their choice before the state's August Senate primary.