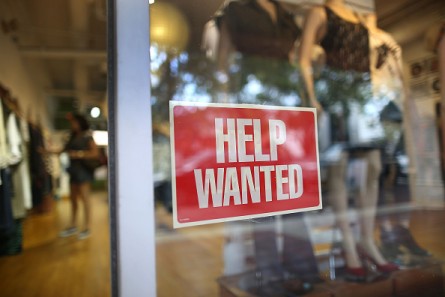 A help wanted sign is seen in the window of an Unika store on in Miami on Sept. 4. The White House contends the U.S. is in the midst of the longest period ever of private-sector job creation. (Photo by Joe Raedle/Getty Images)

The Obama administration's top economic advisers said Monday they have done all they can to improve the economy and need cooperation from Congress to make more progress.

The White House Council of Economic Advisers rolled out its annual report that summarizes the state and trajectory of the U.S. economy. But, notably, woven into their wonky descriptions of complex graphs and and reams of data were thinly veiled pleas for lawmakers to act -- and criticisms of times they opted not to.

Jason Furman, the council's chairman, rattled off a set of figures that he said illustrates how sound the Obama administration’s stewardship of the economy has been. He touted faster-than-projected reductions in the national unemployment rate, rising wages, expanded private-sector job creation and the avoidance of another deep recession.

But as he and others briefed reporters about their penultimate economic study, it became clear hopes for a swifter recovery will fall on the shoulders of Obama’s successor.

Furman and other council members stressed that the American economy is somewhat weighed down by still-sluggish aspects of the global economy. When council member Jay Shambaugh mentioned those “global headwinds,” he also delivered a pitch for Congress to bless a massive trade deal the Obama administration negotiated last year with Asian powers.

Whether that happens is up in the air. Senate Majority Leader Mitch McConnell, R-Ky., has said he believes Congress should wait to consider the Trans-Pacific Partnership (TPP) after a new president is sworn in.

The White House group concludes in the report that the country is “in the middle of the longest streak of private-sector job creation in history: 14 million new jobs.” It also trumpets “the strongest two years of job growth since the [1990s]” and an unemployment rate that has been “cut in half.”

While discussing those figures, Furman noted the Obama administration in 2011 and 2012 shepherded parts of a broader job-creation package through both chambers.

Donald Trump, the Republican presidential front-runner, is less sure of that. He says the number of Americans participating in the labor force is a better way to determine the unemployment rate, which, using his preferred method, he has put at 42 percent.

Obama's advisers mostly sidestepped questions about the billionaire businessman's stance and other gloomy descriptions about the state of the U.S. economy. But they made clear they disagree with Trump's approach for measuring the unemployment rate.

Meantime, Furman also noted that slowing population growth is acting as a drag on the broader economy. Here, too, a call for congressional action.

“We can’t do anything about population growth,” he said before adding that an immigration overhaul bill -- “something we support” -- could help.

The Obama aides also touted the president’s fiscal 2017 spending plan, which GOP lawmakers have labeled dead on arrival. The White House team said the budget would reduce the federal deficit, deal with corporate tax loopholes and boost domestic infrastructure spending. The aides even managed to get in a call for criminal justice reform, saying changes there would provide a significant economic boost.

“There’s a lot that policy can do to influence growth,” Furman said.

But to return historical gross domestic product (GDP) levels this year, he said, would mean Congress passing all of the administration’s wish-list items. And the chances of that happening range from slim to non-existent.

“Barring a crisis, it’s hard to see much of anything getting done in 2016,” Stan Collender, executive vice president at Qorvis MSLGROUP and a former staffer for the House and Senate Budget committees, wrote Monday .

“Even naming courthouses and dams and designating ‘national anything days,'" he wrote, “may have to wait.”

NEW! Download the Roll Call app for the best coverage of people, politics and personalities of Capitol Hill.