In the time it took to type these words, another 12 jillion Republicans announced their candidacies for the 2016 presidential race. 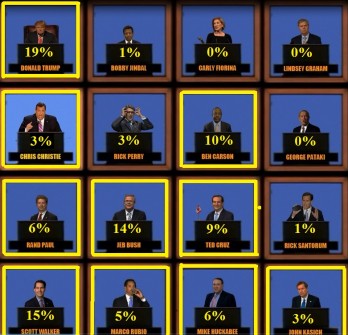 Sadly (not really), there’s only so much time/space/willful suspension of disbelief the media can devote to this quest, so only the highest polling politicians will make it on stage Thursday for the first internecine squabble on national TV.

Can’t make it to Cleveland for Fox News Channel’s four-hour grilling of everyone who’s anyone in GOP primary land?

Have no fear, democracy junkies! A number of organizations will be tuning in all over #ThisTown to gauge whether their favorite horse has actual legs or will quickly be turned to rhetorical dog meat.

PredictIt Primary Debate Watch Party The political handicappers that actually allow one to capitalize on the failings of others are set to throw down at Union Pub (201 Massachusetts Ave. NE). Team PredictIt is expected to supplement the prime-time drama with drinking games, bingo, a photo booth and happy-hour offerings. Admission is free (tickets are available via Eventbrite ), but attendees must be 21 or older to participate. 5:30 to 11 p.m.

Network for Progress Rooftop Mixer/Debate Watch Party Local advocates of hope and change will attempt a hat trick: basking in the glory of summer, poking fun at the GOP debates and bidding farewell to their white knight, "Daily Show" host Jon Stewart. This Democrat-friendly shindig kicks off with a 21-and-over happy hour ($4 domestic brews, $6 wines), shifts into gawker mode at 9 p.m. (“Join us at the lobby bar downstairs for some hilarious and jaw-dropping rubbernecking at the Trump-ed up GOP train wreck,” organizers jeered online.) and then mourns the end of Comedy Central’s nightly assault on all manner of idiocracy at 11 p.m. Early bird registration is available for $5 (admission charge covers food and two raffle tickets); walk-ups should expect to pay $10 per person. 6:30 to 11:30 p.m.

Young Professionals Happy Hour/Debate Watch Party The Republican Jewish Coalition wants to gather the faithful for a few drinks before the candidates get all punchy. The RJC will be pregaming at Dirty Martini (1223 Connecticut Ave. NW) from 6 to 8 p.m. RSVP to Abby Schultz (aschultz-at-rjchq.org; 202-349-9586).

DC Republicans Official Debate Watch Party What good is being Republican if you have to do it alone? The DC Young Republicans, League of Republican Women of D.C., the D.C. branch of the Log Cabin Republicans and the DC Republican Party are all game for a group-hang, pooling their constituencies for an attempted takeover of Johnny Pistolas (2333 18th St. NW). Per the restaurant , the festivities are scheduled from 5 p.m. ’til closing.

Cato’s Debate Live Tweet-athon The libertarian think tank is looking forward to exercising the right to free speech by critiquing the debates in real-time. Cato scholars will weigh in on, well, everything, that comes out of the presidential hopefuls’ mouths, beginning with the not-ready-for-primetime players (5 to 7 p.m.), before rolling right into the main event (9 to 11 p.m.).

But what about those who’d rather gargle with broken glass than sit through a single second of ideological bloodletting? They may indulge in all manner of diversions.

In addition to 15-minutes tours through its American Moments exhibition, the Phillips Collection is teeing up live music (violinist Daisy Castro and Swing Guitars DC are slotted to get jazzy in the Music Room, while acoustic group Gramophonic kicks it live in the courtyard) as well as a food truck showcase (everything from lobster rolls to Carolina-style barbecue) and craft beer tasting (courtesy of Right Proper Brewing Company). Tickets are $12 per person; Phillips Collection Members get in free. 5 to 8:30 p.m.

Tap Takeover at Café Saint-Ex DC Brau Brewing Company, Stillwater Artisanal and Union Craft Brewing are expected to have their way with Saint-Ex’s tap lines during this scheduled three-way . No word yet on which adult beverages will be poured down attendees’ throats, but organizers are promising drink specials from all three breweries and house music well into the evening. 7 p.m. to 1:30 a.m.

Zoolander Screening at CityCenter DC Practice your “Blue Steel” beneath the stars while everyone else gets reacquainted with modeling titan/reluctant assassin Derek Zoolander. Free admission ; BYOB (bring your own blanket). 7 p.m. to ?? 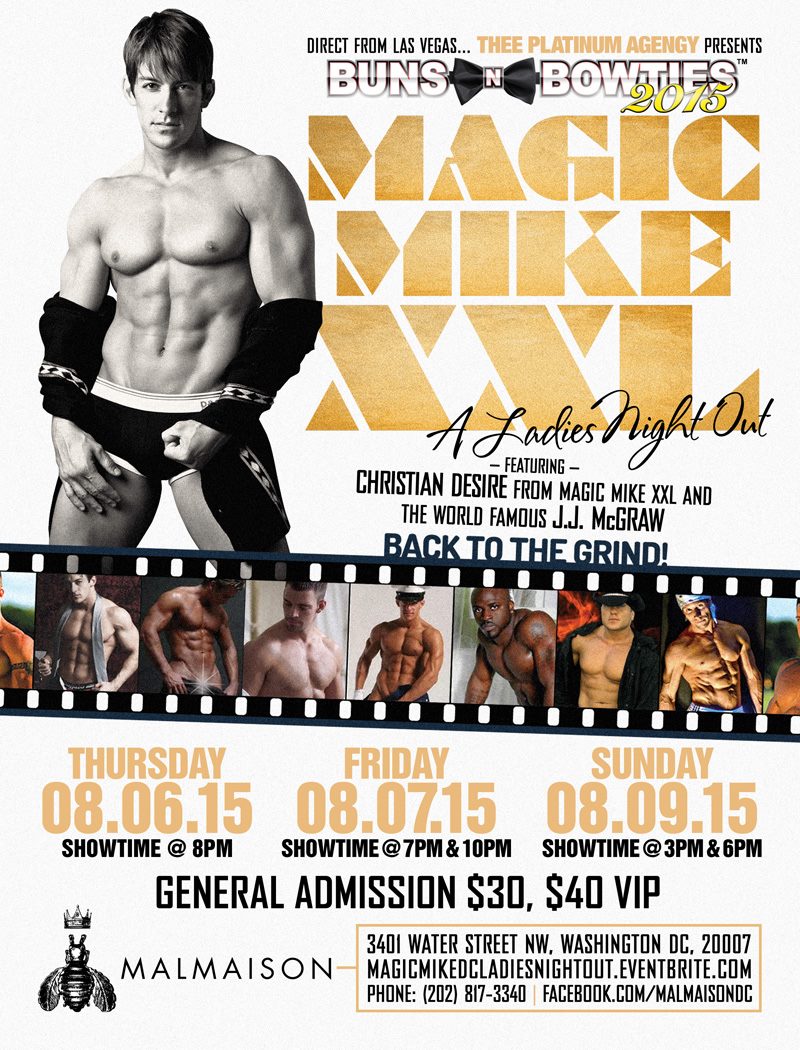 Malmaison (3401 Water St. NW) wants to help break up the daily grind by presenting an all-male revue mirroring Channing Tatum’s latest starring vehicle. The visiting lads will be on hand for a three-night stand. General admission is $30, VIP access will set you back $40. 8 to 10 p.m.

DC Bachata Congress Why settle for watching dudes shake their moneymakers when you can join in?