The provocateurs that make up the Westboro Baptist Church are expected to picket an appearance Rep. John Lewis, D-Ga., has scheduled Wednesday evening at Washburn University in Topeka, Kan. 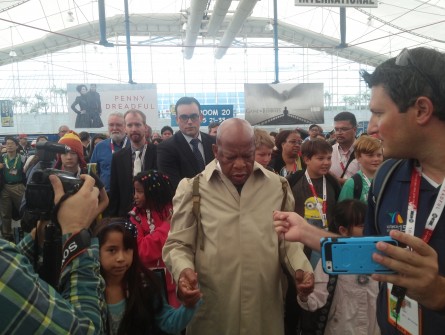 The 15-term lawmaker turned graphic novelist is no stranger to confrontation, having survived decades of oppression before and after his appearance at the 1963 March on Washington and the brutal Bloody Sunday brawl in Selma, Ala., just a few years later.

His reward for inexhaustibly championing equality has been constant reminders that the fight is far from over. According to a statement announcing the planned protest, the WBC is lashing out at Lewis because of his support for Lesbian, Gay, Bisexual and Transgender rights.

Ya know that dude who marched with MLK in Selma? His name is @repjohnlewis & we’re picketing him at @WashburnUniv! pic.twitter.com/nU2svbzyhX