New York Delegation to Appear at Fundraiser for John Faso

Gibson, who won the seat in 2014, will not seek re-election, prompting campaigns by Faso and others. (Douglas Graham/CQ Roll Call File Photo)

As he seeks his party’s nod in New York’s open 19th District, Republican John Faso is getting a little help from his friends in Washington.

On Tuesday, three weeks after Faso launched his campaign, he is scheduled to be in the District of Columbia for a major fundraiser that will feature eight Republicans from the Empire State's congressional delegation as "special guests," according to an invitation obtained by CQ Roll Call. 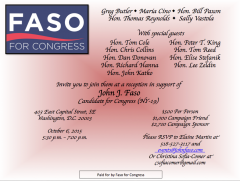 Faso will be hosted in Washington Tuesday by eight members of New York's delegation, according to this invitation obtained by CQ Roll Call.

Along with the sitting Republican members of Congress from New York, Faso is set to be joined at his reception Tuesday evening by Oklahoma Rep. Tom Cole, former New York Reps. Bill Paxon and Thomas Reynolds, businessman Greg Butler, Hewlett Packard lobbyist Maria Cino and Sally Vastola, a member of the board of directors for the conservative group Crossroads GPS.

Faso, a former Republican leader in the New York State Assembly who has mostly avoided politics since his 2006 loss to Democrat Eliot Spitzer for governor, is not alone in his party's primary. Andrew Heaney, an upstate businessman, filed his paperwork and has been campaigning for the seat since August.

The district, rated a Tossup  by the Rothenberg & Gonzales Political Report /Roll Call, has been held by both parties since a court redrew its lines in 2012. That year, a Democrat won when the seat was up for grabs during that presidential election year, but two years later during the mid-term elections, the seat fell into Republican hands.

At least two Democrats, including Ulster County Executive Mike Hein — who is viewed by national Democrats as the party’s best recruit there — and former state Sen. Terry Gipson, are both considering campaigns, but have not yet announced.

Get breaking news alerts and more from Roll Call in your inbox or on your iPhone.