What If Paul Ryan Had Run?

Most of these party stalwarts would have been better off forgoing a run in the first place. After all, it’s a decision that’s worked out well for one prominent Republican leader: Paul D. Ryan.

It gets lost now after all the debates, early balloting and Trump-authored tweets that the speaker of the House once seriously considered a run for president.  In January of last year, he quietly announced that he would not seek the Republican nomination.

The Wisconsin lawmaker would have been a contender — perhaps even an early front-runner in a party that usually falls in line behind the previous presidential ticket’s No. 2 man — though it’s unlikely he would have succeeded where others have failed at blunting Trump’s momentum.

Instead of getting chopped up in his party’s primary, he became speaker of the House, hardly a risk-free job — especially with the current tensions roiling the House GOP — but a potentially history-making one if a Republican president in 2017 opens the door to an era of conservative policymaking. He didn’t need to run a two-year campaign to get the gig either.

And if Ryan ever wants to run for president, the 46-year-old has time. His unblemished record in 2016 puts him in a stronger position than someone like Walker, whose dismal performance in this race probably rules out another bid. “I’ll guarantee you there’s not a day right now where Paul Ryan is saying, ‘Wow, what a mistake I made not running,” says John Brabender, a senior strategist for Santorum. “I imagine what he’s thinking is, ‘Gosh, with all this craziness, who knows how I would have finished.’ ”

Elected Republican lawmakers, leading party strategists and GOP officials interviewed by CQ for this story were in agreement: A Ryan run would not have prevented the Trump phenomenon.

Still, as Trump wins pile up and the establishment belatedly rallies behind Florida Sen. Marco Rubio, it’s fun to speculate: How might Ryan have changed the race? And would he have stood a better chance than Rubio of rallying the moderate and establishment wings of the party?

The case for Ryan practically writes itself. His bold budget proposals made him an intellectual leader within the GOP and gave him near-implacable bona fides with fiscal conservatives.

Far from an awkward policy wonk, the telegenic Gen-Xer also rates as one of his party’s best spokesmen. His rhetoric doesn’t soar like Rubio’s, but he carries a plainspoken manner that can win over American Enterprise Institute scholars and Wisconsin soccer moms alike.

And it’s not as if Republican bigwigs would see a run for president as a big stretch: His tour as 2012 GOP nominee Mitt Romney’s running mate exposed Ryan to the national spotlight and, by most accounts, he acquitted himself well.

“The operating mantra on the Republican side for the last several decades has always been, we go to the next person in line,” says Keith Apell, a GOP strategist who worked for Carly Fiorina’s super PAC.  “Had Paul Ryan run this time around, I think he would have benefited a great deal from that mindset.”

The mechanics of Ryan’s operation would have been formidable. Republicans popular with the party’s business-set always have an advantage with fundraising; in Ryan’s case, few of his rivals would command the same respect from CEOs. A who’s who of the party’s top political minds would have lined up for jobs in the campaign.

And the current House speaker wouldn’t have started a campaign from scratch. According to top operatives within Romney’s campaign, much of the vaunted Romney network, including the man himself, would have backed Ryan.

Strategists say the most consequential part of a Ryan run would have been the effect on money. The $100 million that flooded into a super PAC supporting Bush would have been at least cut in half, they say, in large part because the Romney network would have mobilized on Ryan’s behalf.

“Mitt would have thrown his support completely behind Paul and would have actively engaged and worked his finance network,” says Katie Packer, who was Romney’s deputy campaign manager. “So you wouldn’t have had this massive herd go for Jeb.”

At some point in trying to imagine this scenario, informed speculation gives way to guesswork. It’s impossible to know how the rest of the field would have reacted to his entrance in the presidential race.

Ryan’s Wisconsin ally, Walker, in all likelihood would have stayed put in Madison. What Bush, Rubio, Christie, Texas Sen. Ted Cruz, Ohio Gov. John Kasich and others would have done is murkier. Perhaps some of them, sensing that the establishment lane had become too crowded, would have opted out.

This is where reality starts to butt in, and is why, in the final assessment, Ryan’s decision not to run was the right choice for a risk-averse politician. Ryan might be smart, but so is Kasich. Ryan might have had money, but so did Bush. He might have had an impeccable conservative record backed by the talent to articulate it, but so did Rubio. They all had talent, but, with the exception of Rubio, the race still chewed them up and spit them out. Even with his many advantages, there’s no guarantee Ryan’s fate would have been different.

And that doesn’t even take into consideration Ryan’s liabilities, which are more numerous than is apparent at first glance. 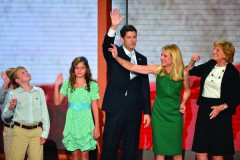 He’s been in Congress nearly 20 years at a time when voters want outsiders; he’s soft-spoken when the electorate is drawn to bombast; his recent penchant for compromise on Capitol Hill fits poorly with a base that prefers shutdowns to deals. Ryan is a strong candidate, but he has flaws.

“We’d have had 18 candidates instead of 17,” says Henry Barbour, a member of the Republican National Committee from Mississippi, when asked how Ryan would have changed the race. “Otherwise, I don’t think it would have been a lot different.” Barbour last week endorsed Rubio.

Ryan also would have been unlikely to solve the party’s biggest primary problem: Trump. The GOP front-runner has built a broad-based coalition of Republicans, with support concentrated among blue-collar voters. Other candidates’ attempts to win them over have failed thus far, despite Trump’s many gaffes and his history of supporting positions normally held by Democrats.

How Ryan might have found success where others haven’t is unclear, even to his friends. “Donald Trump, let’s face it, has defied political gravity,” says Rep. Charlie Dent, a moderate Republican from Pennsylvania who is backing Kasich. “I don’t know that Paul could have changed the Trump effect in this race. I don’t know that anybody could.” A failed attempt to take down Trump would be a poor launchpad for a future White House run. Which is why, as much as Ryan fans can build a case that he could have been closing in on the presidency now, the safe move was staying on the sidelines.

Ryan has said publicly and privately that he harbors no plans to run for the White House. The last speaker to become president, James K. Polk, served more than 150 years ago. Of course, Ryan said he had no intention of becoming speaker of the House before being drafted last year. The same Republicans who think it was smart of him to sit out this year are doubly sure a future bid isn’t such a bad idea.

“Paul Ryan is the kind of Republican we can be successful with in the future,” Barbour says. “He’s serious about policy ideas, and he’s able to articulate their impact.”

Of course, a future GOP primary might feature a similar dynamic to the crazy nature of the current contest.

Asked whether Ryan should run for president in the future, Barbour paused. “He’d be crazy to, or he might be brilliant to,” he says. “I don’t know which.”

NEW! Download the Roll Call app for the best coverage of people, politics and personalities of Capitol Hill.