Incumbents Who Thought They Were Safe Getting a Scare

Brady is chief among the incumbent Republicans being targeted by challengers in Texas. (Bill Clark/CQ Roll Call File Photo)

In three states, the first congressional primaries of the year will be held on Super Tuesday.  And particularly in the mega-state of Texas, the 2016 presidential race could discomfit some House incumbents who have been seen as safe bets for re-election.

Texas sports the Republican Party's largest House delegation -- it has 25 members -- and 14 of those running for re-election face primary challengers. That's more daunting than usual in a year when the unconventional Donald Trump is the GOP front-runner, and voters are giving a more serious look to candidates who are targeting the Republican establishment. “People who come out [to vote] sometimes, but not always, are very persuadable,” said James Harris, a Republican consultant advising Russ Ramsland, a wealthy businessman who is one of three candidates challenging Texas Rep. Pete Sessions for re-election.

Along with Sessions, Republican Reps. Kevin Brady, John Culberson and Lamar Smith are also holding seats considered ripe for the anti-establishment's picking. All face multiple primary opponents, and if no primary candidate receives a majority, the top two would head to a run-off on May 24.

Run-offs typically attract fewer voters than normal primary elections, making it easier for an insurgent anti-establishment bloc of voters to prevail. For instance, former Texas Republican Rep. Ralph Hall lost a primary run-off in 2014 to John Ratcliffe, who went on to win the general election.

Of those members facing challengers, much of the concern has been directed at Brady, the Ways and Means chairman who is seeking an 11th term in a district just north of Houston.

"He's in a very tough race and he could be headed to a run-off," said one veteran GOP lawmaker familiar with the race. "These three guys are coordinating," the lawmaker added, referring to Brady's three primary opponents: Craig McMichael, who ran in 2014; Andre Dean, who ran in 1998; and former state legislator Steve Toth.

One Republican party official, speaking privately to discuss party strategy, said Brady's seat could "likely go to a run-off," but added that it was unexpected that Brady would lose. 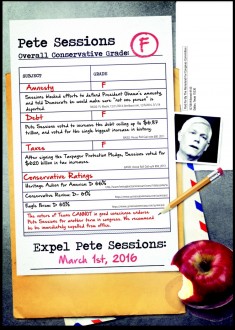 This campaign mail piece, obtained by Roll Call, has been deployed against Sessions in his district.

Like Brady, Sessions is facing a crowded field back home. On Friday, Sessions missed votes in the House, just four days before election day.

In the Dallas area, he has become the subject of aggressive campaign mail pieces. One recent mailer highlighted  a residence Sessions owns in Florida. Another gives Sessions straight "Fs" on a conservative report card, and calls on voters to expel him on Tuesday.

While Harris, the consultant, admitted Sessions holds a “commanding lead” in terms of campaign resources, he said, “he could be forced into a runoff, as conservative, anti-establishment voters are coming to the polls."

"His votes with congressional leadership have created a lot of angst with conservative voters," Harris added.

In Sessions' case, the national Republican official said they had not "seen any polling that shows the top of the ticket being an issue."

Texas Rep. Bill Flores, the chairman of the Republican Study Committee, declined to comment specifically on races other than his own, in which he is facing two opponents. But he said voter turnout – a metric that encapsulates both the number of voters and the type – is hard to predict in a district like his in the Waco area.

"Some races are in better shape than others," he said. "When we ran our polling earlier in this cycle, we tried to design a poll that would figure out what the turnout model was. I think we did a pretty good job. I think we've got a handle on what it'll be like."

Flores and other Texas Republicans headed home on Friday to campaign.

Republicans aren't surprised that incumbents are becoming hyper-aware of the political environment back home.

"That's exactly where you want them to be, is concerned, because when you get beat is when you're complacent. Most of these members will be successful," said Rep. Tom Cole of Oklahoma, a former chairman of the National Republican Congressional Committee.

Cole said the voter turnout in Iowa, New Hampshire, South Carolina and Nevada have all been high, and he expects that to continue on Super Tuesday.

"You're dealing with a Republican electorate that is very energized. It's volatile during the nominating period," he said. "I don't expect any large casualty list among our colleagues that are facing primaries and I feel pretty good about the fall because Republican energy and turnout are high and that's likely continue into November."

Arkansas and Alabama, the other two states holding congressional primaries in conjunction with the presidential race -- haven't triggered the same amount of concern among congressional Republicans about their primary challenges.

Save for later
Topics: republicans poli